Social networks, the second evolution of the business press

Economic press  experienced a first evolution towards the digital world with the creation of digital editions. Currently, these digital editions have achieved a big audience and are fighting to capture more readers. The traditional leadership of  Expansión becomes a dead heat with El Economista if we look at their digital editions. Meanwhile, the digital version of Cinco Días is significantly below the performance  of its two competitors.
But right now we are living a second digital evolution happening on social networks. It is a social evolution.
During the last year the commitment of the business press for social networks has increased. The main objective is to gain social coverage and thereby traffic to their news portals, thereby increasing the advertising business figure.
The digital media we monitor with Social Elephants give us a conclusive insight: up to the  80% of traffic of these digital media comes from Facebook and Twitter and only 20% comes from other sources.
Expansión is the leader on Facebook while El Economista is the leader on Twitter.
Expansión has bet more than their competitors on Facebook with a 188 % fan growth in the last year, which consolidates their Facebook community as the largest with 113,000 fans and doubling the growth rate of El Economista and Cinco Días. El Economista, with 67,000 fans, stays far from Expansión.
In the case of Twitter, we see that the yearly growth (YTD 2014) is consistent for all the magazines and it ranges between 37%  (Cinco Días) and 52% (El Economista). El Encomista  with 273,000 followers on Twitter stands up as a real alternative to Expansión with 259,000 followers.
Cinco Dias, in line with their monthly unique visitors, maintains the third position both on Facebook  with 55,000 fans, and Twitter with 154,000 followers. In both cases it is a proportion consistent with the differences in web traffic..
What content really works? Looking at the share of  voice on the social networks, Expansión connects better on Facebook and El Economista on Twitter.
On Facebook, El Economista is the most active media with 17 posts/day compared to only 4 posts/day of  Cinco Días. The high post rate of El Economista cannot help to get a good share of voice because its engagement is very low, just 0.55, i.e. they only generate 0.55 interactions per 1000 fans in each post. Cinco Días with its 21% Share of Voice outperforms the 18% of Share of Voice of El Economista, thanks to a better acceptance of their content that generates a good engagement of 2.79 interactions per 1000 fans. Expansión is the absolute leader in Facebook with a 61% Share of Voice and an engagement of 1.49.
On Twitter, El Economista is again the main content generator with 73 tweets a day, although closely followed by Expansión with 64 tweets a day. On the contrary, Cinco Días publishes  "only" 28 tweets a day. On Twitter, El Economista is engaging  with their community better than Expansión and Cinco Días. With an engagement of 0.11 El Economista owns a 50% of social Share of Voice versus 36% of Expansión and 14 % of Cinco Días. 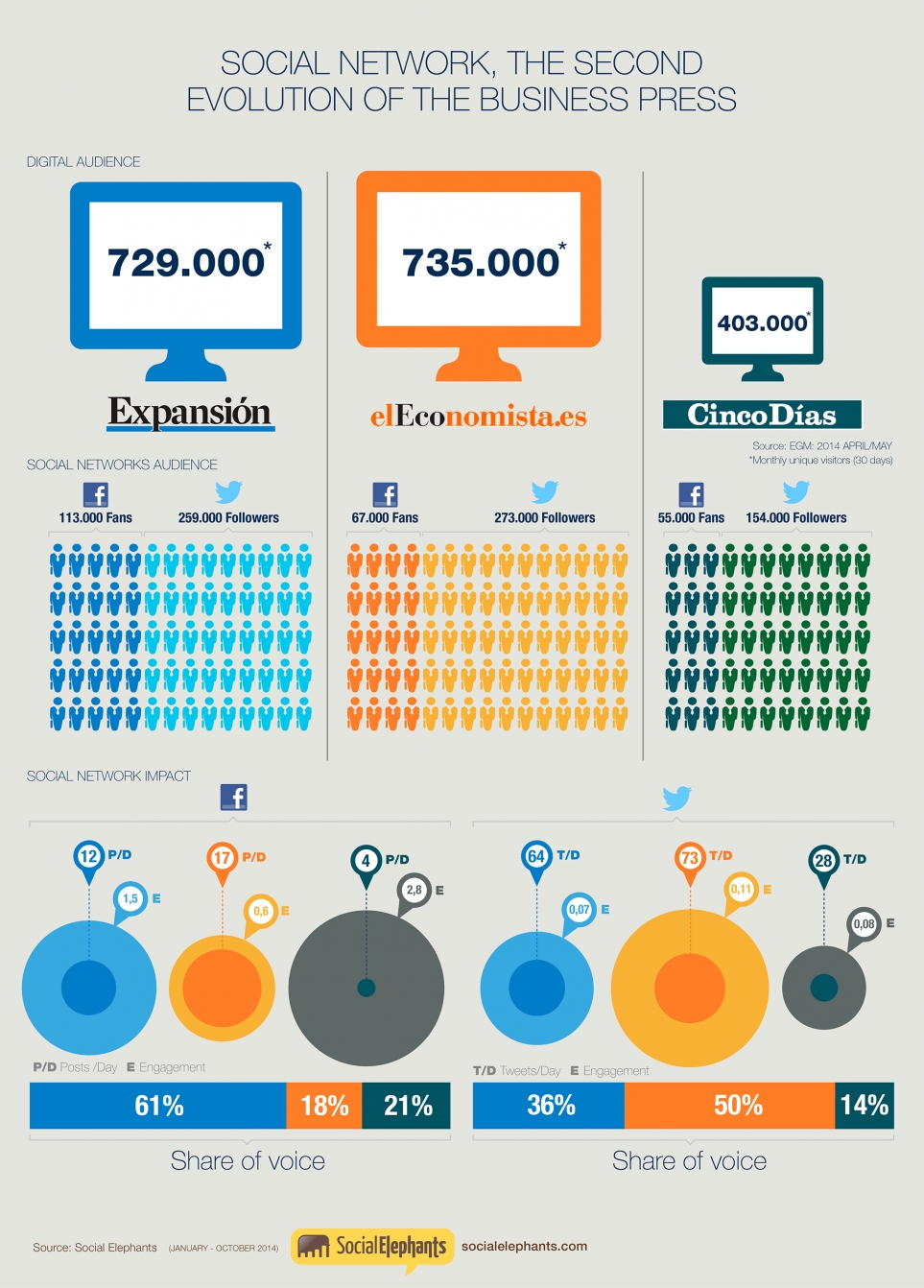