As soon as the global COVID-19 lockdown (March 2020) forced the world to start working remotely, the Zoom App suddenly became the new hype for coworkers who needed to engage online and, as an inevitable result, people started to suffer the consequences of adapting to the “new normal” made of too many hours spent in video calls. That’s the surge of the “Zoom Fatigue”. We don’t have doubts that the “zoom fatigue” is real and we decided to dig deeper into this issue to get some insights using  the Social Elephants Listening product to collect data from Twitter and analyze the results. We collected several thousands of tweets published from September to mid October 2020 containing the expression "zoom fatigue" or the hashtag #ZoomFatigue and we observed that the topic generates hundreds of daily conversations with spikes up to 2-3 thousand daily tweets.

Daily tweets and RTs matching the expression "zoom fatigue" or "#ZoomFatigue" (2020).
Thanks to our algorithm we estimate that this activity corresponds to more than 10 million impressions around this topic and a Reach of more than 8 million unique people. We could count more than 20K authors of tweets and RTs engaging in this global conversation about Zoom Fatigue.

Estimated Impressions & Reach of tweets about "zoom fatigue" in the analyzed period (September-October 2020). The authors (Contributors) of the tweets and RTs are more than 20 thousand different people.
We compared the volume of tweets containing expressions like “Zoom fatigue” with other expressions associated to other popular video call APPs, like “Teams fatigue” or “Meet fatigue”. It was surprising to realize that nearly 100% of those tweets actually dealt with Zoom and “Teams fatigue” is four times more frequent than “Meet fatigue”. 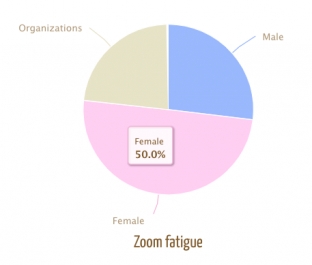 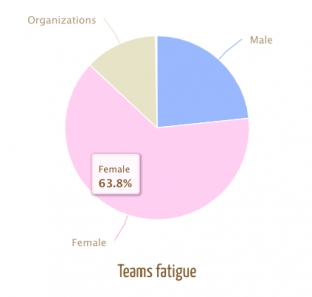 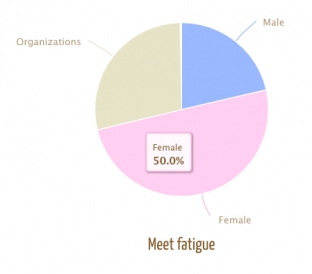 Gender analysis of the authors of the tweets.
It is really a “pandemic” problem and we spotted London and many cities of North America as the main location where people share tweets to talk about it: 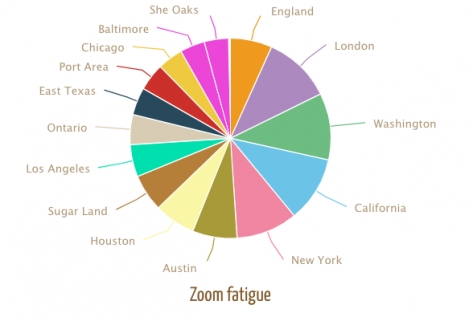 Popular locations of the author of the tweets.
In order to address the issue from a broader perspective we analyzed tweets containing expressions like: “Meetings are useful”, “Meetings are useless”, “Meetings are a waste of time” and “Pointless Meetings”. From all those tweets, only 4% of them qualified meetings as useful. This really should ring a bell that something has to be done to improve the online productivity of your team!

Relative number of tweets containing different expressions dealing with "Meetings".
With Social Elephants we can go beyond the numbers and focus on the content, analyze the sentiment and categorize tweets mentioning specific topics of interest. It's also interesting to check the most popular tweets ranking the content by number of RTs: 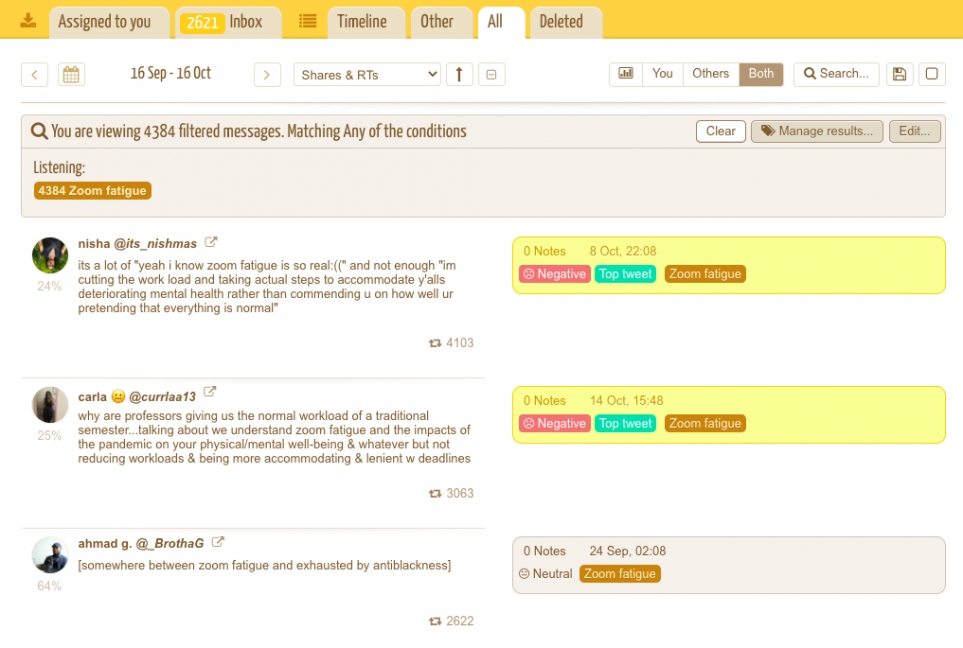 Popular tweets ranked by number of RTs.
Analyzing the content of all the tweets we extracted a tag cloud of the most popular terms associated with "Zoom Fatigue" with a clear hint at the fact that the zoom fatigue "is real", references to "online people", "learning" (education) or engaging in "virtual" "video" calls at "work", most of the people sharing "tips" or asking for "help". 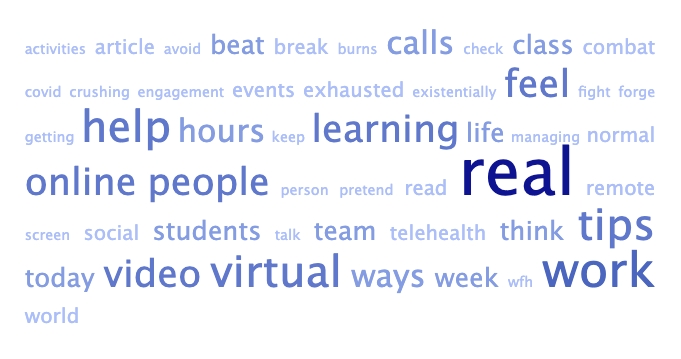 Tag cloud of frequent words associated with "zoom fatigue" .
Listening can be a powerful method to extract a list of influencers on Twitter and this can be definitely the starting point for an Influencer Marketing campaign that can go well beyond Twitter, of course. In this specific case study we can see that a lot of mainstream media with very high influence (we score influence with an indicator that goes from 0%  to 100%) are talking about "zoom fatigue": 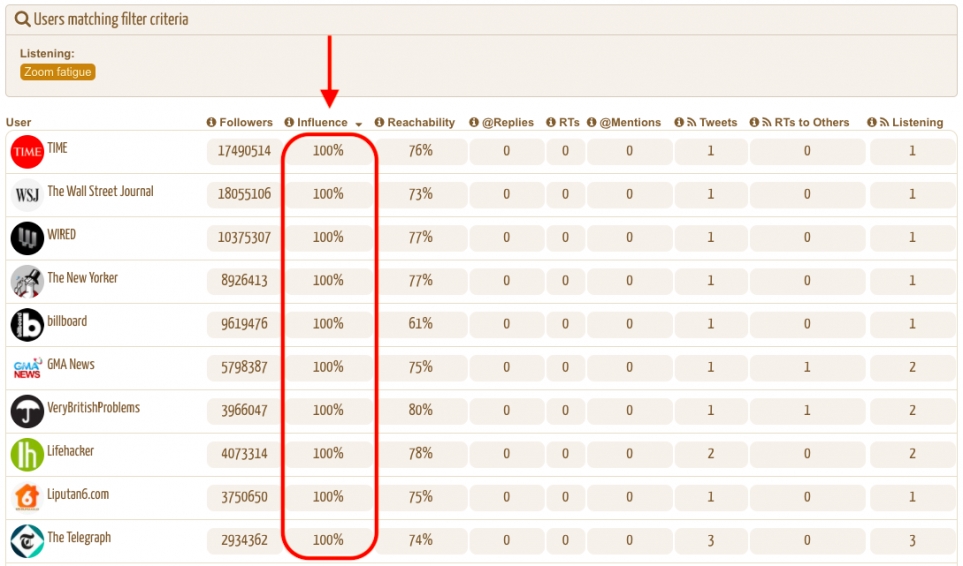 Influencers tweeting about "Zoom fatigue".
Social Elephants is also useful to track the User Generated content and spot the most active users or those Twitter accounts who are  amplifying the content with many retweets. We highlight a Health Institute as the most active account in these months (> 80 tweets!) or Apps like @timz.flowers suggesting possible solutions to mitigate the Zoom fatigue: 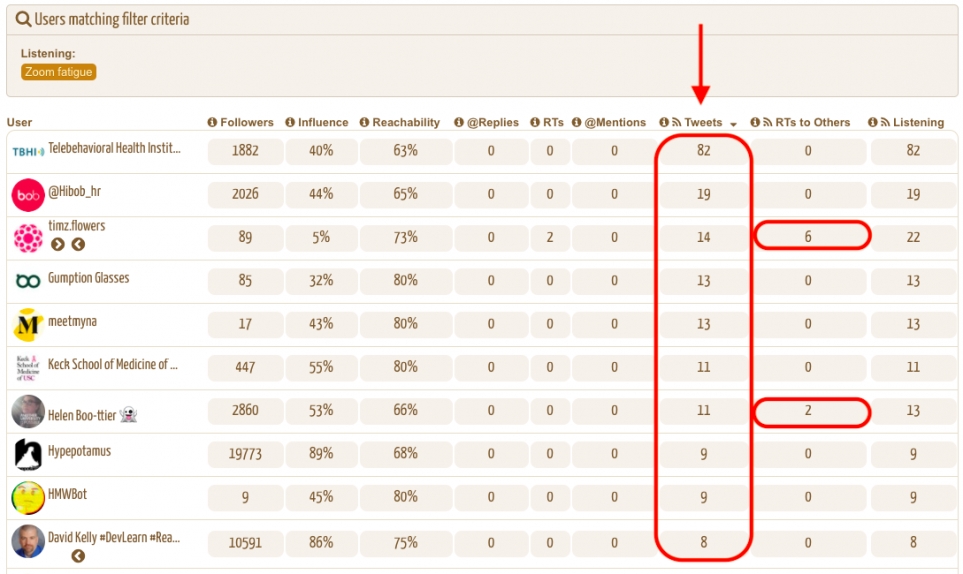 Most active users tweeting or retweeting about "Zoom fatigue".
Another powerful way to analyze and display twitter conversations is the Social Network Analysis: data is exported from Social Elephants  and processed via the Gephi software and, as a result, we can get a visual representation of the accounts who tweeted about Zoom fatigue. Each dot is a Twitter account connected with other accounts with lines that represent tweets mentioning one another: the bigger the dot, the most relevant is the account within its community. Different colors help to distinguish different communities or clusters of conversation. In this representation you don't necessarily get influencers or popular brands to stand out from the noise, even smaller accounts have the chance to be noticeable if they are really relevant for their community when talking about a specific topic. In this case we can highlight some popular accounts like @wsj (The Wall Street Journal) or @zoom_us of course, but we can also clearly spot some smaller accounts like @drdevonprice , @weareteachers (Academics) or @MeetLamaHQ (Meetings Automation APP) that truly have a voice when dealing with Zoom Fatigue. 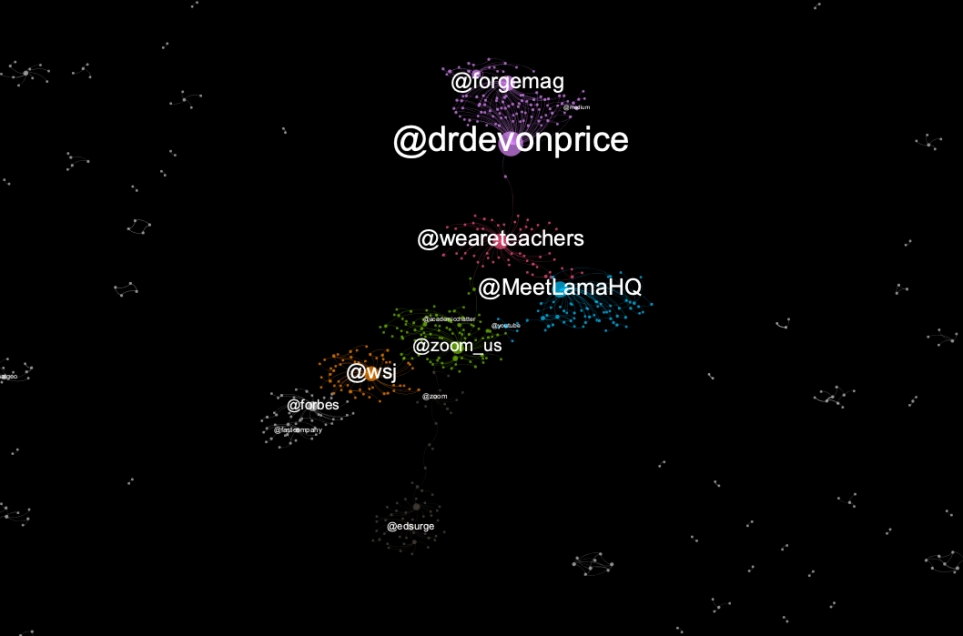 Social Network Analysis of the twitter conversations about "Zoom Fatigue" [Data source: Social Elephants + Gephi].
Back
Our site uses cookies for analytics. If you're unsure about it, take a look at our privacy policy.
Accept